In a rally, Anwar Ibrahim welcomes Nasarudin into the party. However, Jamaluddin and Osman are absent. Rumours say they are ready to defect to BN. 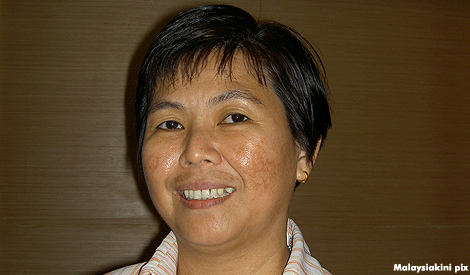 On Feb 1 evening, the Chinese media manage to track Hee to her house in Ipoh. She denies she was in hiding, claiming that she switched off her handphone due to too many calls asking her to comment on the defection rumour.

However, the PKR reps deny stepping down. A man claiming to represent Osman lodges a police report also denying that the latter has resigned.

Hee confirms that she has resigned from DAP. Along with Jamaluddin and Osman, the trio now supports BN. With Nasarudin's reverse defection to Umno, BN and its independent allies now have 31 seats against Pakatan's 28.

Nizar seeks an audience with sultan to dissolve assembly

On the same afternoon, deputy prime minister and Perak Umno chief Najib Abdul Razak declares that BN has gained a majority in the Perak assembly. 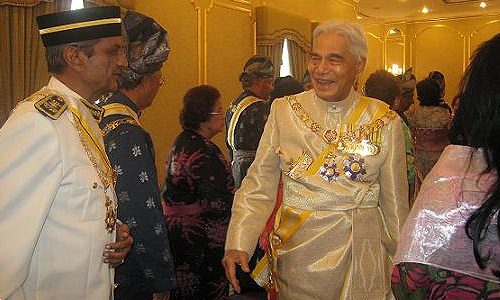 Najib meets Perak ruler twice on the same day to seek consent for BN to form the state government.

The sultan also meets Hee, Jamaluddin and Osman to question whether they support BN.

Meanwhile, the Pakatan state government and speaker Sivakumar file a lawsuit to declare the seats of the three defectors vacant for by-elections.

In the afternoon, the sultan grants an audience to Nizar. Palace refuses Pakatan's request to dissolve the state assembly. Instead, Nizar and all Pakatan state exco members are asked to resign. Otherwise, their seats will fall vacant.

At 4pm, police take over the state secretariat and ask Nizar and Pakatan excos to clear their offices and return the official cars, among others.

In the evening, prime minister Abdullah Ahmad Badawi meets the sultan. Later he tells a press conference in Subang, Selangor that Pangkor assemblyperson Zambry Abd Kadir will be sworn in as the new Perak MB.

Zambry sworn in as new MB

Zambry is sworn in as the new MB at Istana Iskandariah in Kuala Kangsar. All Pakatan assemblypersons are absent with more than 3,000 supporters holding a demonstration outside the palace.

During the two-hour demonstration, some protesters lie on the road to block the passing cars, stopping dignitaries and BN politicians from attending the swearing-in ceremony.

In Ipoh, Nizar leads the Pakatan excos in official cars to enter the state secretariat building to show that they are still the lawful government. They face multiple blockages.

An hour later, cops escort Nizar and the excos out of the secretariat building. Nizar cries and says he has been evicted from his own office.

The death of PAS' Bukit Gantang MP Roslan Shaharum triggers a by-election. It is seen as a referendum on the Perak crisis. Pakatan nominates Nizar as the candidate and he wins with 2,789 majority votes. 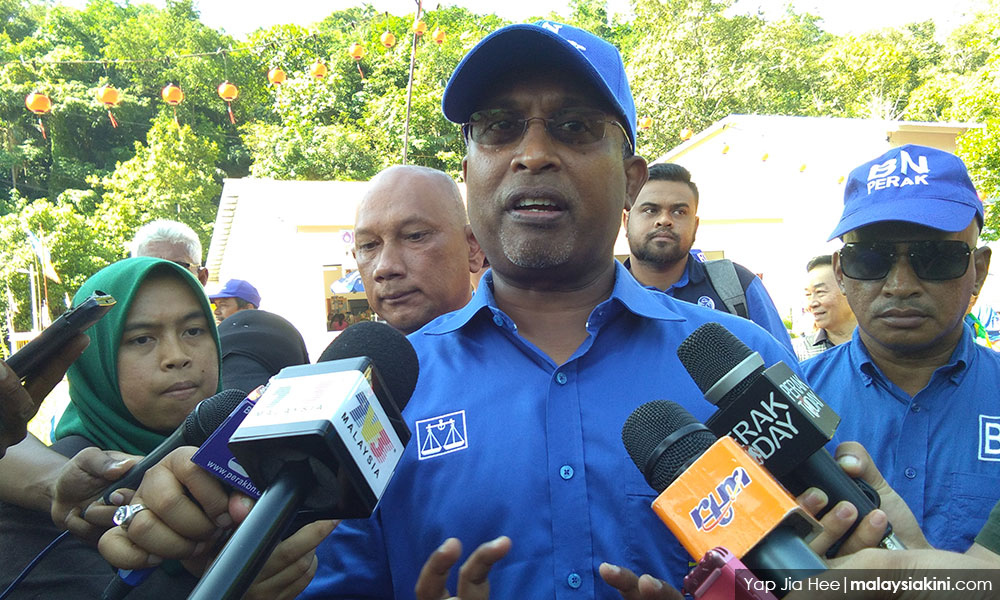 BN excos sworn in before sultan

Perak speaker Sivakumar suspends Zambry for 18 months and the other six executive councillors for 12 months.

Nizar vacates the MB’s official residence but he vows to rule Perak as the lawful MB. 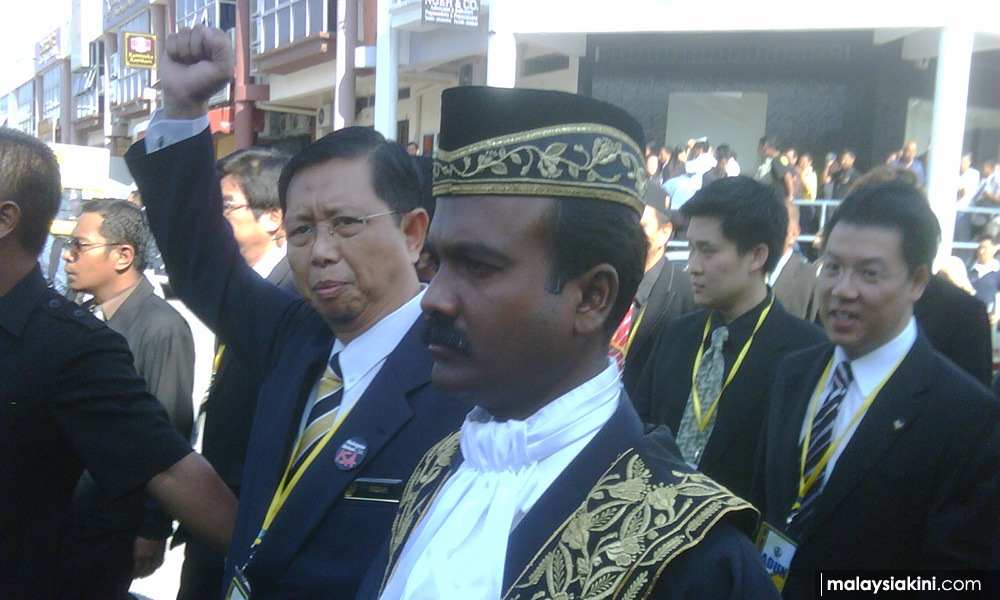 Sivakumar announces that an emergency state assembly sitting will be held on March 3.

The first motion is for a vote of confidence for Pakatan’s ousted MB Nizar and the second motion is for the state assembly to be dissolved in order to hold fresh elections. 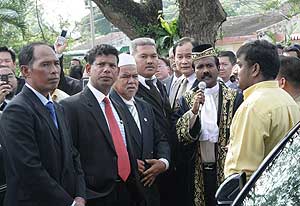 However, Pakatan assemblypersons are barred from entering state assembly building by police and an unidentified group. They are forced to conduct the meeting under a tree.

Pakatan names the tree “Pokok Demokrasi” and erects a plaque to commemorate the historic proceeding.

The attorney-general files charges against six men in a nationwide swoop against those who had allegedly insulted the sultan on the Internet over the ruler's role in the ongoing political crisis.

On March 16, two more are charged under the same Communication and Multimedia Act 1998.

The Ipoh City Council demolishes the 'Pokok Demokrasi' marble plaque that was put up to commemorate the controversial state assembly emergency sitting. A week later, Perak Pakatan auctions the shards for RM42,900.

Pak Lah steps down as PM

During the Umno general assembly, Abdullah Ahmad Badawi announces that he will meet the Agong on April 2 to convey his intention to quit as prime minister and hand over the post to Najib.

Najib takes the oath as Malaysia's sixth prime minister. He stays in power for nine years until BN's defeat in GE14.

The Federal Court revokes Perak speaker's suspension order against Zambry and his six exco members from the state assembly.

The apex court rules that Sivakumar acted beyond his powers.

Bersih spokesperson Wong Chin Huat is arrested under the Sedition Act by a team of police officers at his home in Taman Sri Sentosa, Kuala Lumpur.

This comes after he urged the public to wear black to protest the Perak state government takeover by BN.

It is estimated that 116 people are arrested in relation to the Perak incident.

Perak state assembly convenes and soon plunges into chaos. State reps from Pakatan and BN are involved in a shouting match and scuffle over the speaker's seat. It is complete pandemonium in the assembly.

Finally, Sivakumar is dragged out from the assembly after BN elects R Ganesan as the new speaker. 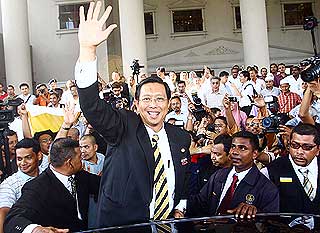 Pakatan wins the first round of the legal battle. Kuala Lumpur High Court declares Nizar as the legitimate MB.

MB vs MB: Court of appeal rules in favour of Zambry

Eleven days later, the Court of Appeal reverses the High Court's decision by ruling that Zambry is the Perak MB.

Nizar files an appeal to the Federal Court. 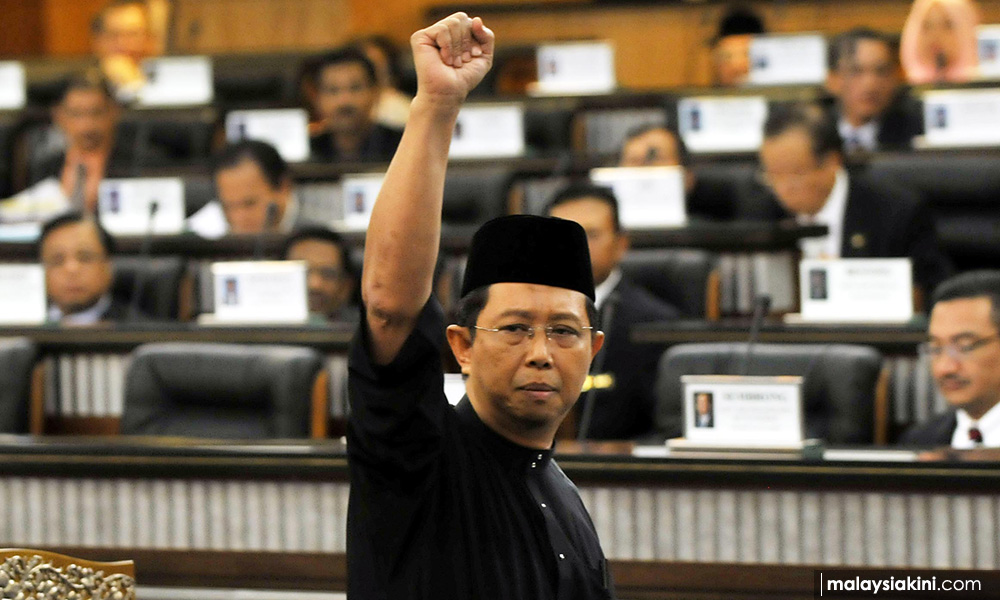 Nizar is sworn in as Bukit Gantang MP in Dewan Rakyat. He then leads a group of Pakatan MPs shouting "Bubar DUN" and "Hidup Rakyat". Five minutes later, they are evicted and suspended for two days

Sivakumar claims the police grabbed his songkok and robe. 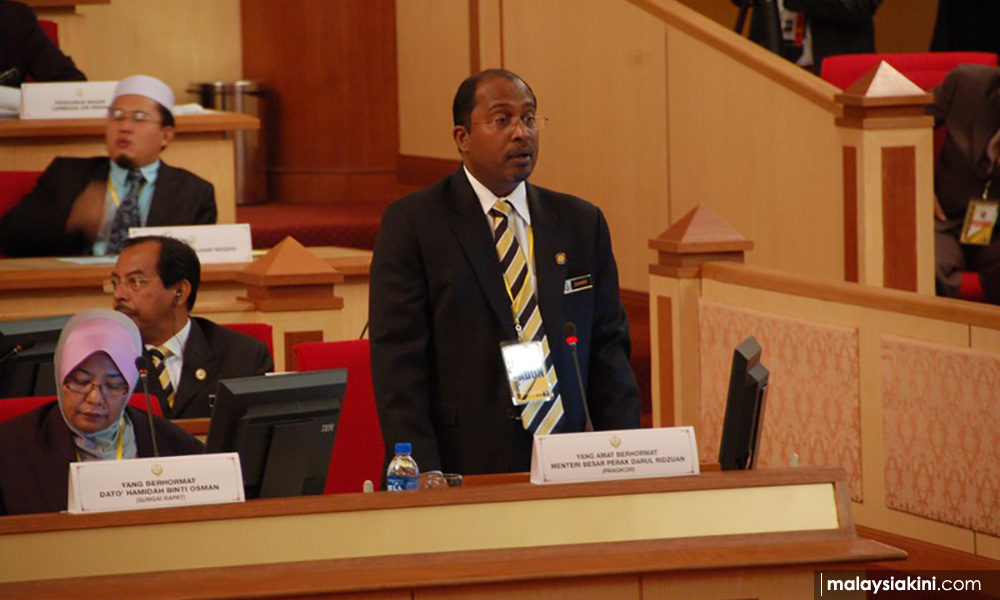